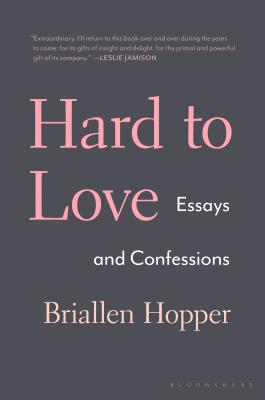 Briallen Hopper’s Hard to Love honors the categories of loves and relationships beyond marriage, the ones that are often treated as invisible or seen as secondary–friendships, kinship with adult siblings, care teams that form in times of illness, or various alternative family formations. She also values difficult and amorphous loves like loving a challenging job or inanimate objects that can’t love you back. She draws from personal experience, sharing stories about her loving but combative family, the fiercely independent Emerson scholar who pushed her away, and the friends who have become her invented or found family; pop culture touchstones like the Women’s March, John Green’s The Fault in Our Stars, and the timeless series Cheers; and the work of writers like Joan Didion, Gwendolyn Brooks, Flannery O’Connor, and Herman Melville (Moby-Dick like you’ve never seen it!).

Briallen Hopper writes about pop culture, religion, politics, friends, family, and herself for New York Magazine, Los Angeles Review of Books, the New Republic, the New Inquiry, Avidly, the Chronicle of Higher Education, and Killing the Buddha, among many others. Her essays have been cited or recommended by sources like the New York Times, the Rumpus, Flavorwire, Longreads.com, and Slate. She has a PhD in American literature from Princeton and teaches writing at Yale.

Katherine Stewart is the author of the forthcoming The Power Worshippers (Bloomsbury Publishing, 2020). She writes about religion, politics, policy and education for The New York Times op ed and other publications.