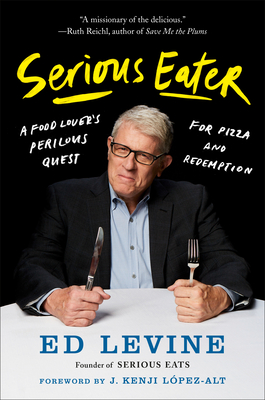 THIS EVENT WILL NOW TAKE PLACE AT BROOKLINE BOOKSMITH. All other details remain the same.

Every ticket comes with a copy of SERIOUS EATER and a free ThermoPop food thermometer.

In 2005, Ed Levine was a freelance food writer with an unlikely dream: to control his own fate and create a different kind of food publication. Against all sane advice, he created a blog for $100 and called it...Serious Eats. Even as Serious Eats became better-known--even beloved and respected--every day felt like it could be its last. Ed secured handshake deals from investors and would-be acquirers over lunch only to have them renege after dessert. He put his marriage, career, and relationships with friends and family at risk through his stubborn refusal to let his dream die. He prayed that the ride would never end. But if it did, that he would make it out alive.

Ed Levine is the founder (his employees affectionately call him the overlord) of Serious Eats, as well as creator and host of the Serious Eats podcast, Special Sauce. In 2016, Ed was inducted into the James Beard Foundation's Who's Who of Food & Beverage in America.

Chris Kimball is the co-founder of America's Test Kitchen and the founder of Christopher Kimball's Milk Street in Boston.