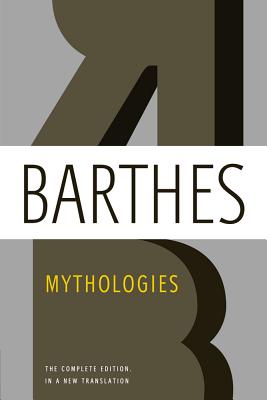 By  Roland Barthes , Translated by  Richard Howard , Annette Lavers
$ 6.99
Out of Stock
On Our Shelves Now

"No denunciation without its proper instrument of close analysis," Roland Barthes wrote in his preface to Mythologies. There is no more proper instrument of analysis of our contemporary myths than this book—one of the most significant works in French theory, and one that has transformed the way readers and philosophers view the world around them.

Our age is a triumph of codification. We own devices that bring the world to the command of our fingertips. We have access to boundless information and prodigious quantities of stuff. We decide to like or not, to believe or not, to buy or not. We pick and choose. We think we are free. Yet all around us, in pop culture, politics, mainstream media, and advertising, there are codes and symbols that govern our choices. They are the fabrications of consumer society. They express myths of success, well-being, or happiness. As Barthes sees it, these myths must be carefully deciphered, and debunked.

What Barthes discerned in mass media, the fashion of plastic, and the politics of postcolonial France applies with equal force to today's social networks, the iPhone, and the images of 9/11. This new edition of Mythologies, complete and beautifully rendered by the Pulitzer Prize–winning poet, critic, and translator Richard Howard, is a consecration of Barthes's classic—a lesson in clairvoyance that is more relevant now than ever.

Roland Barthes (1915-1980) was a French cultural and literary critic, whose clever and lyrical writings on semiotics made structuralism one of the leading movements of the twentieth century. Barthes had a cult following and published seventeen books, including Camera Lucida, Mythologies, and A Lover's Discourse.

Richard Howard teaches in the School of the Arts at Columbia University, USA. He has also translated works by Barthes, Foucault and Todorov.